With a fine turn-out plus integrating the Wallys into the IRC maxi fleets, racing feels very different at this year’s Maxi Yacht Rolex Cup, organised by the Yacht Club Costa Smeralda in conjunction with maxi yachting’s governing body, the International Maxi Association.

Compared to pre-pandemic times this is especially true in the Maxi Class where the Wallycentos are enjoying intense boat-for-boat racing against George David’s Rambler 88 and the 100ft Comanche. This was despite a light day on the water when the wind was generally closer to 5 than 10 knots and shifting through 40-50°.

In the light northeasterly and a short lumpy sea, the race committee again sent the fleet out to sea towards a weather mark, before turning west into the southern end of ‘Bomb Alley’, the faster boats then heading up to the Monaci islands and on to the finish – generally a much shorter course yesterday’s.

An order is already developing in some fleets including the Maxis. Here Sir Lindsay Owen Jones’ Magic Carpet 3 and Claus-Peter Offen’s Wally 100 Y3K came respectively second and third both today and yesterday, while the substantially smaller Reichel/Pugh 82 Highland Fling XI won both races.

“The boat may be 12 years old, but it is still extraordinary,” enthused Laidlaw, his steed having won here previously on four occasions. “It was good the day it came out of the box and frankly it doesn’t matter if it is blowing hard or light – we are competitive. And it is great team, although yesterday we were very lucky and brought the wind down behind us.”

On Y3K, navigator Mike Broughton was celebrating doing so well aboard one of the oldest boats in the Maxi class. They enjoyed today’s light conditions: “We go okay up until 14 knots when the lighter boats start planing. The start lines have been fun. Today we managed to park after the first tack, but got going again and had a good race.

“The bigger maxi fleet provides better racing and it is nice to see Wallys mixed in. Wallys do quite well under IRC but we wouldn’t have expected to beat Deep Blue as we have for two days running.” Wendy Schmidt’s brand new Botin 85 grand racer currently lies fourth.

In the middle of the Maxi class leaderboard there is a group of boats including Rambler 88, Leopard 3 and Comanche, whose crews are hoping for more breeze. 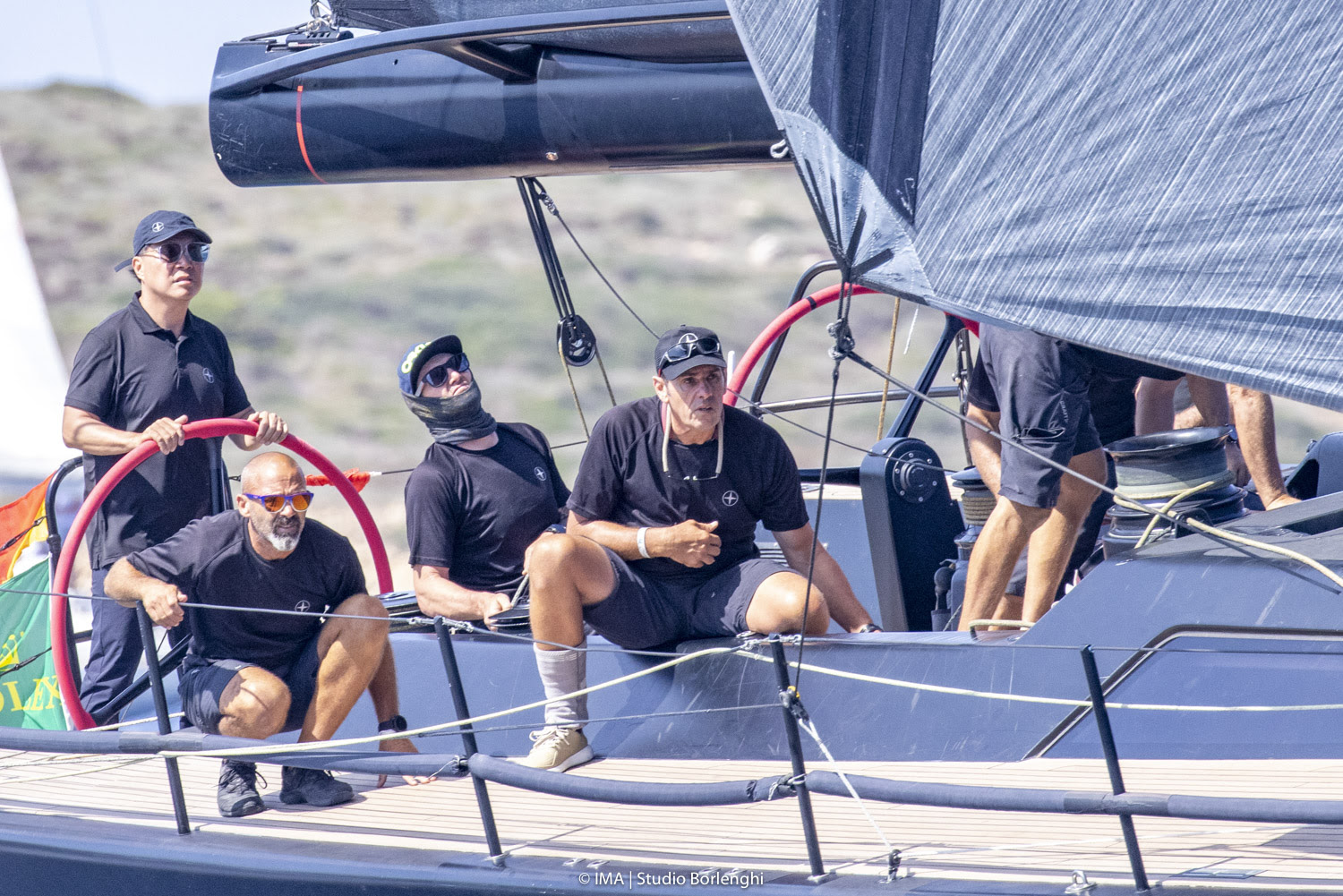 Elsewhere in the fleets, two other boats still have a perfect scoreline: Canadian Terry Hui’s Wally 77 Lyra, winner of the Wally class in the last two Maxi Yacht Rolex Cups, again prevailed in Mini Maxi 3/4 but today by only 6 minutes 37 seconds from Fabio Cannavale’s Baltic 78 Lupa of the Sea (compared to yesterday’s 33.5 minutes).

“The first beat was tricky because it was very light and still really shifty,” said Lyra’s tactician Hamish Pepper. “The crew did a good job around the course again. We just sailed the boat as best we could. I’m happy the course wasn’t any longer.”

This is only Lyra owner Terry Hui’s third season racing yachts (and this was shortened by the pandemic) and his success is testament to his having a good crew and a well sorted boat. “We came in early to practice for a few days before the start, so we are a well oiled machine!” said Hui. “This is my first trip since COVID and I haven’t seen an airport for a long time. I am glad we are back, but it was very light today.”

In the Super Maxi fleet of 100+ footers, it was again the J Class yachts that dominated, although with the Swan 115 Shamanna today not far behind. Of the Js, Ronald de Waal’s Velsheda once again took honours on corrected time by 3 minutes 34 seconds from Topaz, whose helmsman, Peter Holmberg, explained their predicament: “The result wasn’t so great but we did everything we wanted to. We got the start we wanted, and the right, the shifts went our way but they just got ahead of us and there wasn’t much opportunity to come back. In short, Velsheda is better in waves, but if we are close to them and sail a great race, we have a chance to beat them.” Aside from some ultra-tight mark roundings in the Maxi fleet, the tightest competition is, as ever, between the former Maxi 72s in Mini Maxi 1. Among these five, today it was the turn of American Hap Fauth’s Bella Mente to win, his highest rated and newest boat claiming victory by 4 minutes 37 seconds from yesterday’s winner Dario Ferrari’s Cannonball.

Tactician Terry Hutchinson explained: “The race committee did a good job setting a course and getting us going. Early on in the day we were going upwind in 5 knots and by the time we started it was 7-9 knots, but it was a good quality first beat.”

Jim Swartz’s Vesper did well on the two upwind legs, especially the second to Monaci. “We were three lengths away from Vesper and were ‘having a conversation’,” explained Hutchinson. Ultimately Vesper finished fourth while Bella Mente stayed ahead to take the bullet, but, overall, trails yesterday’s winner Cannonball by a point. 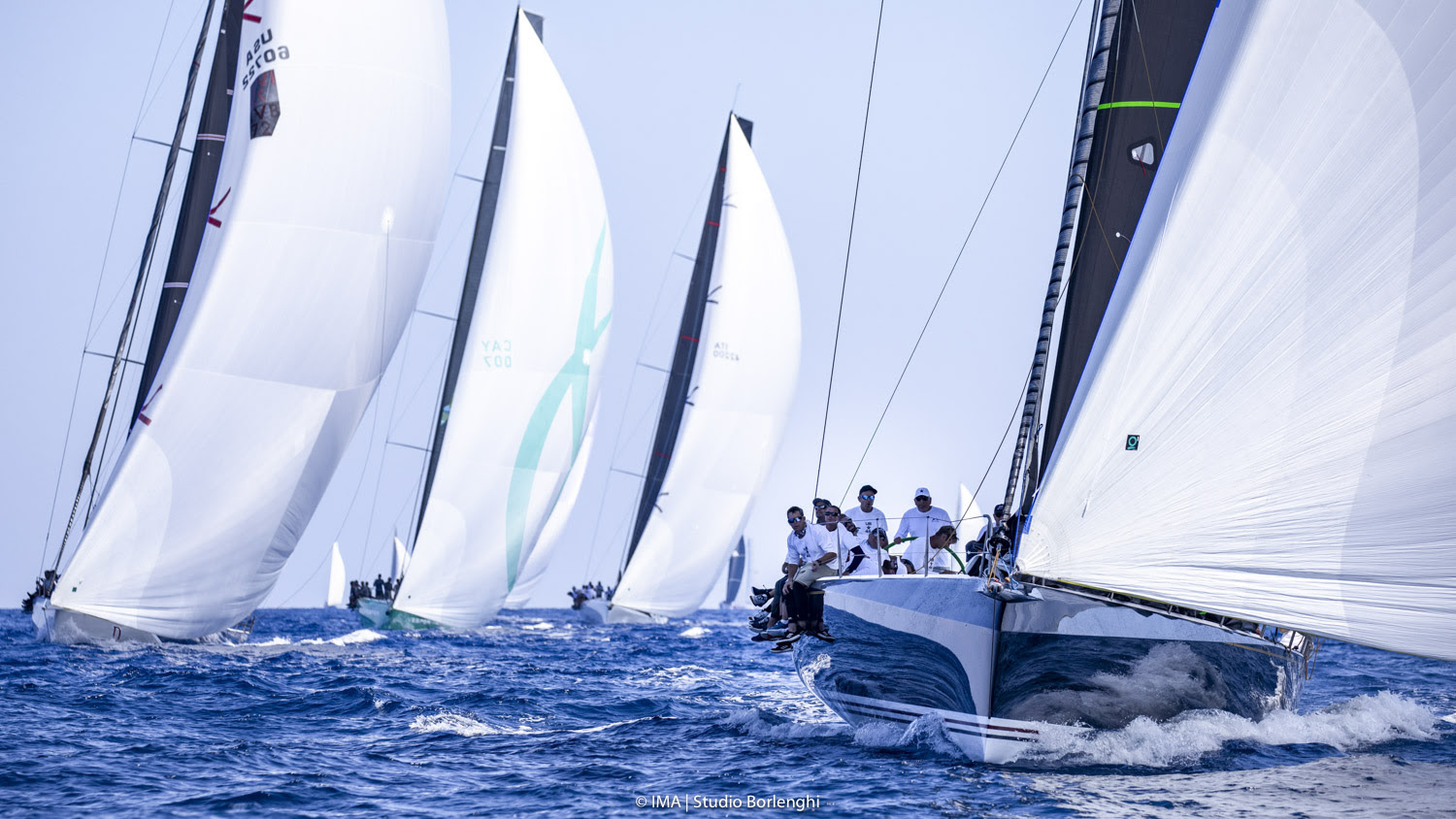 As in the Maxi class, so in Mini Maxi 2 size seems not to matter. While yesterday Alessandro Del Bono’s Reichel-Pugh 78 Capricorno won at the top of the 60-80ft Mini Maxi size range, today the immaculate ILC maxi was relegated to second by one of the smallest, Jean-Pierre Barjon’s Swan 601 Lorina 1895.

Their victory was born of taking the favoured left up the first beat. “For us it was a really nice day but it was quite difficult for our owner to helm in the light wind and small, short waves,” explained Lorina 1895’s tactician Gildas Philippe, the 470 two time Olympian, who recently coached the French 470 women’s team to bronze in Tokyo. “The boat is quite nice upwind, but in choppy conditions it is not easy. We were a bit lucky with the left shift we had. Then we controlled quite well.”

In third place overall in Mini Maxi 2 is the Dutch-flagged Marten 72 Aragon on this occasion chartered to a Russian team led by Viachaslav Ermolenko, tied with International Maxi Association President Benoît de Froidmont on board his Wally 60 Wallyño.

“Today we got a fourth like we did yesterday so it was good for us,” said de Froidmont. “We have been really sailing well, but the conditions are very complicated. On Wallyño, it is not easy but we were not too far from the rest of the fleet. Generally we are very happy – the fleet is all together so tactics are everything.”