Slow boats past the Scillies in the Rolex Fastnet Race

Ironic after Sunday’s brutal start, less than 48 hours in and across the Rolex Fastnet Race fleet competitors have been struggling in light winds, especially around the Traffic Separation Scheme between Land’s End and the Scilly Isles and, for those right at the front of the fleet, off Cherbourg.

“We messed up the finish, but not only the finish,” Coville admitted. “We had quite a safe start and actually it was quite tough to have so many tacks on such a big trimaran. The boat is going very well – we were happy with her. We have improved a lot, especially upwind in tough conditions. After the Casquets we were seven miles behind Maxi Edmond de Rothschild but we made a lot of navigation and tactics mistakes during the race. It was quite difficult to be honest with a lot of changes and a lot of different conditions, but very exciting.”

Coville added that on three occasions during the race their maxi-trimaran with its towering rig had run out of wind. “For me the world’s two most fantastic races are the Rolex Sydney Hobart and the Rolex Fastnet Race. These races are just amazing. We should participate every two years in each of them!”

The next boats due into Cherbourg later today are the final Ultime, Ultim emotion 2, due south of Land’s End at 0830 BST this morning with 150 miles to go to Cherbourg. She was just ahead of the leading monohull, the mighty ClubSwan 125 Skorpios. Overnight Skorpios has finally managed to shake off the lead IMOCA, Apivia, sailed doublehanded by Charlie Dalin and Paul Meilhat which early this morning was due south of the Scilly Isles. 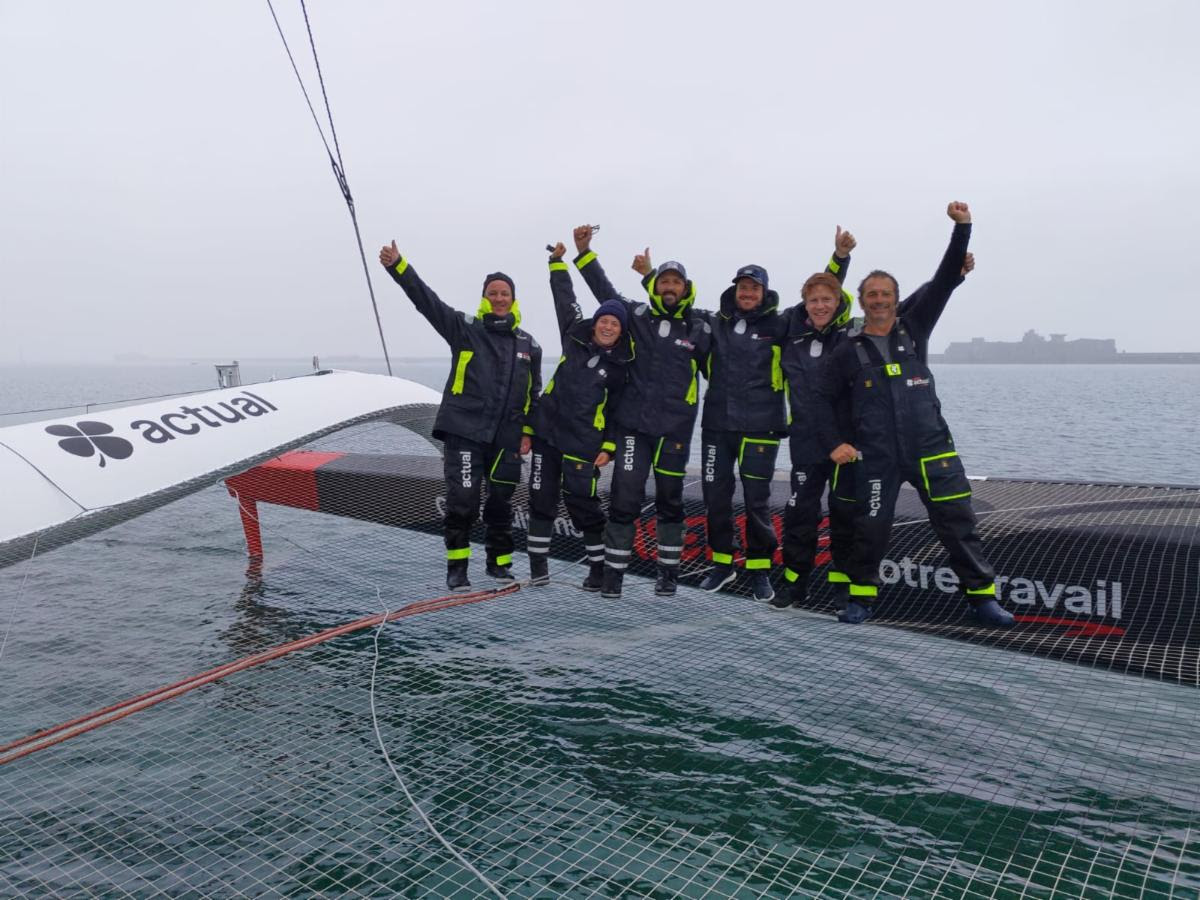 At present nine IMOCAs have rounded the Fastnet Rock with Sam Davies on Initiatives Coeur lying fifth behind 11th Hour Racing and ahead of her partner Romain Attanasio on Fortinet – Best Western. Initiatives Coeur rounded the Fastnet Rock at 0500 BST this morning, but only after a struggle. “It was pretty tricky to get around because at night there is more coastal effect that knocks the wind away, so it was tricky tacking up to get around the Rock.“The conditions at night were amazing. It was so nice to be in flat water. There was amazing sunset. It did rain on us as is tradition before you go around the Fastnet Rock.”

Half way to Bishop Rock this morning, Initiatives Coeur was in 10-14 knots of unstable wind under their Code 0 headsail. However Davies warned that the boats behind were set to come in with new breeze: “I think the whole fleet will compress because behind us they have more wind and more header and ahead of us they are still spinnakering and gybing downwind.” The good news is that means a more straightforward run, in pressure, from the Scilly Isles to the finish off Cherbourg, where Initiatives Coeur’s ETA is 1000-1100 BST tomorrow. Formation flying on a painful-looking starboard tack in the mid-Celtic Sea, were the leading Class 40s. Out in front, by a nose, remains defending champion Luke Berry on Lamotte – Module Création, followed by Pierre Casenave-Péré on Legallais and Italian Andrea Fornaro on Tales2 to their south. All the frontrunners were making 6.5-7.5 knots.

Currently IRC Zero boats are dominating the overall IRC leaderboard, the winner of which will ultimately claim the coveted Fastnet Challenge Cup this year. While the ClubSwan 125 Skorpios is plainly the run-away leader on the water, it remains the Polish VO70 I Love Poland and the VO65 Sailing Poland which are prevailing under IRC corrected time. I Love Poland rounded the Fastnet Rock at around 02:30 BST this morning followed by Sailing Poland just under two hours later. Both are now making 10-12 knots directly towards Bishop Rock. Top British boat in IRC Zero, David Collins’ Botin 52 Tala this morning was approaching the Fastnet TSS, holding fifth place in class.

The two frontrunners have broken away in IRC One with less than 50 miles to go to the Fastnet Rock this morning, both making 6.5-7.5 knots. Overnight Swede Jonas Grander’s Elliot 44CR Matador has nosed ahead, but RORC Commodore James Neville’s HH42 Ino XXX holds a better position tactically to weather and will have less costly manoeuvres to make sailing along the top of the TSS approaching the Rock later today. Both are also doing well under IRC corrected time as is Rob Bottomley’s Mat 12 Sailplane, Andrew Hall’s Lombard 46 Pata Negra, while alongside her the venerable Stormvogel, celebrating 50 years of her line honours victory, has also had a good night.The IRC Two leaders on the water are now into the top third of the IRC One fleet. The lead duo, both JPK 10.80s Tom Kneen’s Sunrise and the Dutchwoman Astrid de Vin’s Il Corvo, headed up the east side of the Land’s End TSS yesterday, as the rest of the pack went west of it. They have since tacked to cover with the result that Sunrise has made a net gain of 18 miles on sistership Richard Fromentin’s Leclerc Hennebont / Cocody. Under IRC this trio is also looking good under corrected time, with Ronald Prins’ J/122e Sailmon JR on the ascent overnight.

Half way up the IRC Two fleet on the water, the IRC Three leaders are approaching quarter of the way across the Celtic Sea to the Fastnet Rock. Here it is much tighter at the front with four boats fighting it out on the water. Sun Fast 3600 Fujitsu British Soldier is a nose ahead of Louis-Marie Dussere’s JPK 1080’ Raging-bee² and Philippe Girardin’s J/120 Hey Jude and Alexis Loison and Guillaume Pirouelle’s defending champions, JPK 1030 Léon. Loison/Pirouelle continue to hold a slender lead in the class, but hold a much stronger lead in the IRC Two Handed class, where Figaro sailor Loison proudly holds the record for the most number of victories.

Just 12 miles astern of the IRC Three leader, also heading out into a relatively clement Celtic Sea, are the IRC Four frontrunners. They are slightly more spread out with David le Goff’s JPK 10.10 Raphael leading on the water from Harry J. Heijst’s S&S 41 Winsome, which is having a spectacular race. Both are looking strong under IRC corrected time as are Tim Goodhew and Kelvin Matthews on their Sun Fast 3200 Cora and Francois Charles’ Dehler 33 Cruising Sun Hill 3.