One of the most intense battles, both on the water and under IRC corrected time, in this year’s Rolex Fastnet Race played out in IRC Three. Here the scratch boat was unquestionably the JPK 1030 Léon, skippered by the defending IRC Three and Two-Handed champion and former overall winner of the Rolex Fastnet Race, Alexis Loison, racing yet again doublehanded, but this time with Guillaume Pirouelle.

Interesting was the diversity of crew make-ups: Fully crewed, doublehanded or mixed doublehanded, it seemed to make no difference to the competitiveness of the top boats. While the lead doublehanders in IRC Four were occasionally in the mix, it was mainly the doublehanded crews in IRC Three that held the top places in the IRC Two-Handed ranking.

After surviving Sunday’s brisk start, the battle for the front of IRC Three, as the boats tackled the stiff beat down the Channel, as usual was down to picking the shifts and playing the tide. Sadly some British Sun Fast 3300s teams had not made it through – Kelvin Rawlings and Stuart Childerley (hoping to repeat their IRC Two-Handed victory from 2015) opted out of the race as James Harayda and Dee Caffari on Gentoo retired with a ripped mainsail.

Another, Swell, sailed by double Olympic gold medallist Shirley Robertson and Volvo Ocean Race sailor Henry Bomby, was also having a hard time having been OCS, although they had managed to recover well from their premature start, overhauling Léon by the Needles. But then as Bomby recounted, they “got Portland Bill wrong – we were playing for a left shift, so our main rivals got four or five miles ahead of us in the first six hours. So we had to play catch up from there.”

At 0600 on the first morning, the Sun Fast 3600 Fujitsu British Soldier skippered by Henry Foster, had nosed into the lead, hugging the shore at Start Point with Louis-Marie Dussere’s JPK 1080 Raging-bee², Philippe Girardin’s J/120 Hey Jude and Raging-bee² neck and neck for the lead to the south. The British army remained out in front as they sniggled around the Lizard coastline and continued on in the lead – just – as they diving south of the Land’s End TYSS and up its west side.

At the Fastnet Rock on the early hours of Wednesday morning, it remained tight on the water, but the lower-rated Léon led over Raging-bee² and Hey Jude by 45 minutes with Fujitsu British Soldier 13 minutes further back. At this stage Swell was 1 hours 19 minutes behind under corrected time.

Half way into the return journey to Bishop Rock Fujitsu British Soldier and Hey Jude stayed west as Raging-bee² had nosed ahead of Léon to the east. By being further east still, Swell gained by being able to lay the east side of the TSS west of the Scilly Isles, as the boats ahead lost out, having to gybe to avoid it.  But the major hurdle ahead was the ridge that engulfed the fleet late on Wednesday into the early hours of Thursday, that parked the fleet. Here the Fujitsu British Soldier crew made the decision to head west of the TSS. This worked out badly for them and they remained more firmly stuck than the boats to the east. Hey Jude and Swell came out best in this reshuffle along with doublehanders Olivier Burgaud and Sylvain Pontu on their JPK 1080 Aileau just to their south. 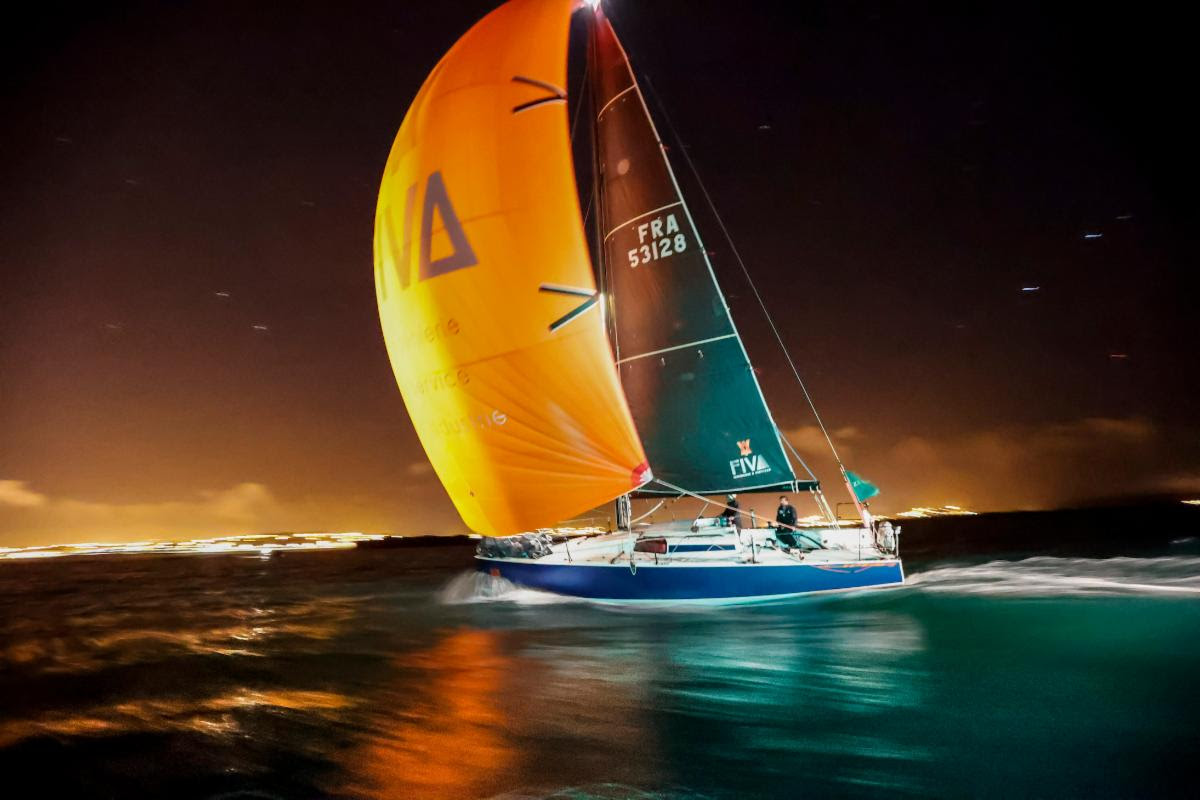 The long reach back east down the Channel was when the Brits on Swell finally edged into the lead on the water and then, unimaginably, ahead of Loison under IRC corrected time. Here the frontrunners were all laying the south side of the Casquets TSS until Léon edged south and Swell began to cover her vigorously, however this tactic left Aileau free to sail a path closer to the TSS and the rhumb line and take the lead on the water.

Swell did well to stay in front of Léon, but on the approach to Cherbourg the local sailing demi-Gods on their lowered rated JPK 10.30, gybed closer to Cap de la Hague and were able to close enough on Swell to beat them by 36 minutes under corrected time at the line.

“I am very happy to win again and very pleased with our performance,” commented Loison, a professional Figaro sailor. “We pushed very hard on board and that is good for Guillaume and me. We trained well together for all of this year with the Figaro, so to win our class in the Rolex Fastnet Race is a great thing to have happened.”

Throughout the race, Léon found herself in much closer competition than when Loison and JPK boss Jean-Pierre Kelbert were the runaway IRC Three and Two-Handed winners in 2019.

“Maybe because the weather was different, and I think because all of the Two-Handed crews have worked a lot to produce a better performance,” muses Loison over why it was closer this year.

“We have seen a lot of well prepared boats, especially in IRC Two-Handed, like Shirley and Henry. They were very strong and made a good come back at the end. After the Scillies, Swell sailed very fast and we could not do anything, but have a little cry! However near the end, Swell went further south and had less wind than us and we could come back.”

“Another Two-Handed team Aileau took a very good option near the end, so we had to worry about them too. The Rolex Fastnet is always a difficult race, there is a lot of options and a lot of boats, so it is impossible to control all of the boats. We chose our tactics looking at Swell, and didn’t consider Aileau. The Raz Blanchard [Alderney Race] produces a new complexity to the race, but it is a good finish.”

Léon’s 27-year-old co-skipper Guillaume Pirouelle, a past winner of the Tour de France à la Voîle, is being groomed by Loison to take over the Région Normandie Figaro campaign from him in 2022. “It is a pleasure to race with Alexis and a great opportunity to learn from his knowledge,” said Pirouelle. “We have had a great season in the Figaro, so to finish first in the Rolex Fastnet Race is so good. I am very happy.” 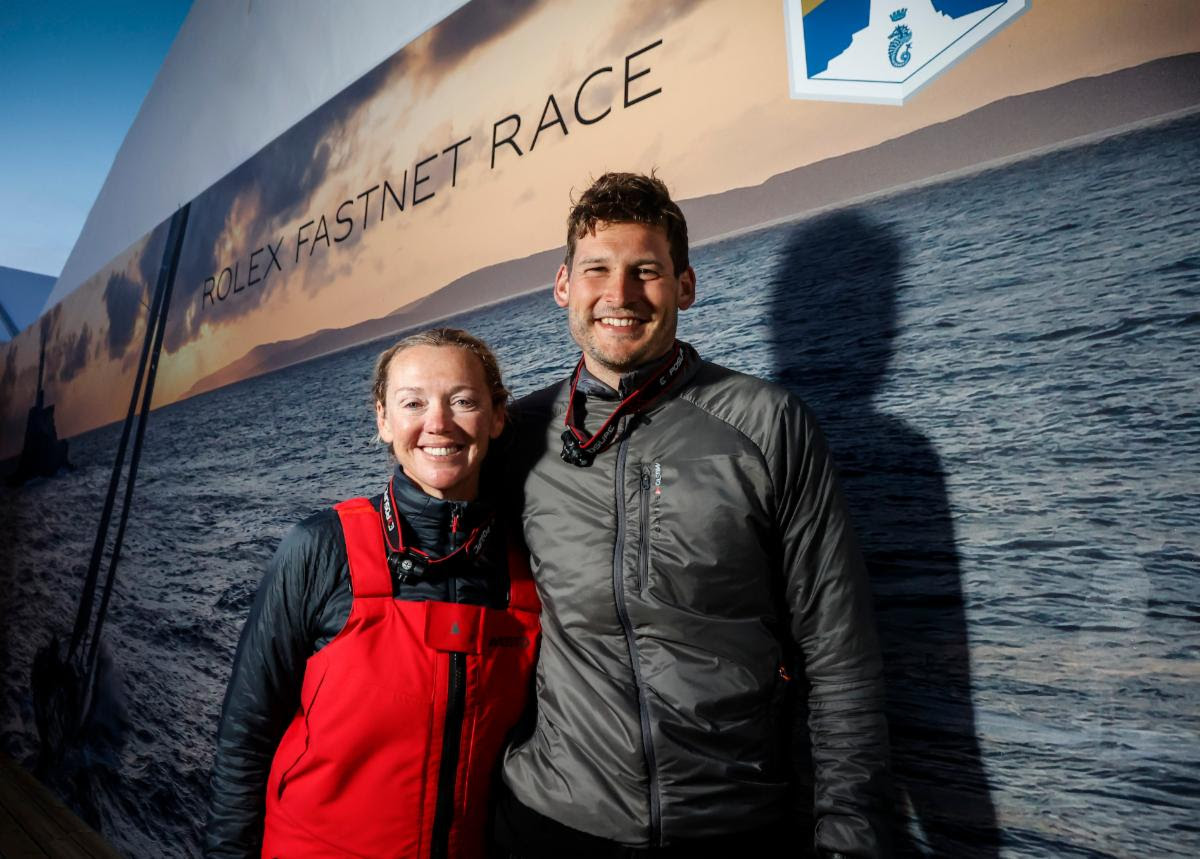 Robertson and Bomby had to make do with second place both in IRC Three and Two-Handed. While strong contenders in this fleet, after their disappointing first six hours, even at the Scillies on their return journey, a podium position, and certainly a second place, seemed impossible.

“If you had asked us at the Scillies I would have said it was a long shot,” said an exhausted looking Bomby. “Then as we started making progress I started to believe it was possible.” Robertson, better known for inshore racing, seemed exhausted to the point of dropping as Swell docked in Cherbourg’s Port Chantereyne.

“It was so intense- it feels like we’ve raced around the planet!” admitted the two time Olympic champion turned TV presenter. “It feels like I’ve been away a lot longer than five days. There were some really hard days and some really amazing days when we’ve grinned from ear to ear. To be right in the thick of it, battling for first place, was amazing.  “Henry is an amazing talent. He always believed that somewhere along the line we would be able to get back into them.”

Among the contenders for IRC Three honours, Léon had some strong rivalry from another successful Cherbourg boat, Raging-bee². Ultimately Louis-Marie Dussère’s JPK 10.80 lost ground in the Channel and finished third on corrected time 44 minutes, behind Swell.”  “We were very pleased to be the first to the Fastnet Rock as we knew from the beginning of the race that Alexis Loison would win!” declared Dussère.

“But for this race we had a good fight with him, always close and that was new for us and the first time we have crossed the finish line ahead of him. For me the new course is better because on the old course, when you passed the Scillies, the race was almost over. Now when you arrive at the Scillies it is not finished at all! At Alderney, Aileau was one mile behind us. We went south for more tide and Aileau went north and after that that she was five miles ahead. But at the finish Aileau lost the wind and we passed them.”