Whacky races make for a day of special FX

HOW TO FOLLOW TOKYO 2020 – FULL RESULTS, SCHEDULE AND MORE!

The excitement kicked up a gear on the third day of the Tokyo 2020 Olympic Sailing Competition as the women in the 49erFX Skiff put on a display of high speed boat handling and fast-thinking tactics.

The wind was gusting and shifting wildly for the courses close to shore, although the breeze dropped later in the day for the start of Men’s Skiff – 49er competition. Some pre-event favourites have made good comebacks in the Laser and Radial events, while two opening races in the Finn have gone extremely well for Turkey.

The 49erFX opened with a dramatic race that fully showcased just how challenging and unpredictable these skiffs can be. Early on it was the gold and silver medallist teams from Rio 2016 who took the lead.

Rio silver medallists Alex Maloney and Molly Meech (NZL) led around the first mark. The reigning Olympic Champions from Brazil, Martine Grael and Kahena Kunze also had a go in the lead, but they couldn’t keep the British behind them.

After a slow start, Charlotte Dobson and Saskia Tidey (GBR) put the hammer down, moved into the lead and were unstoppable. Behind them all kinds of unforced errors were striking other teams. The Kiwis capsized, the Brazilians were lying in second down the final run to the finish but their gennaker sheet got jammed and they couldn’t clear the problem, watching almost the whole fleet sail past as they finished in 15th.

That whacky race set the tone for an afternoon of highly entertaining FX competition. After three weeks of training in light winds, the strong, gusty breeze blowing off the shore created chaos and unpredictability for pretty much everyone. The British have taken the lead with scores of 1,1,6 ahead of Steph Roble & Maggie Shea (USA) who scored 3,2,14. After the disaster of the first race, the Brazilians recovered their composure to win the last race of the session, scoring 15,5,1 for third overall.

Dobson was thankful to have come through the day unscathed, downplaying any excitement about winning her two opening races. “I think if someone had told us a week ago that we’d get these results on day one, we’d have bitten their arm off.” She said it was about keeping things simple, or “boring” as she described it. “We just wanted to be boring and then be brave when we saw the opportunity. And I think that’s kind of what we did a little bit today.” 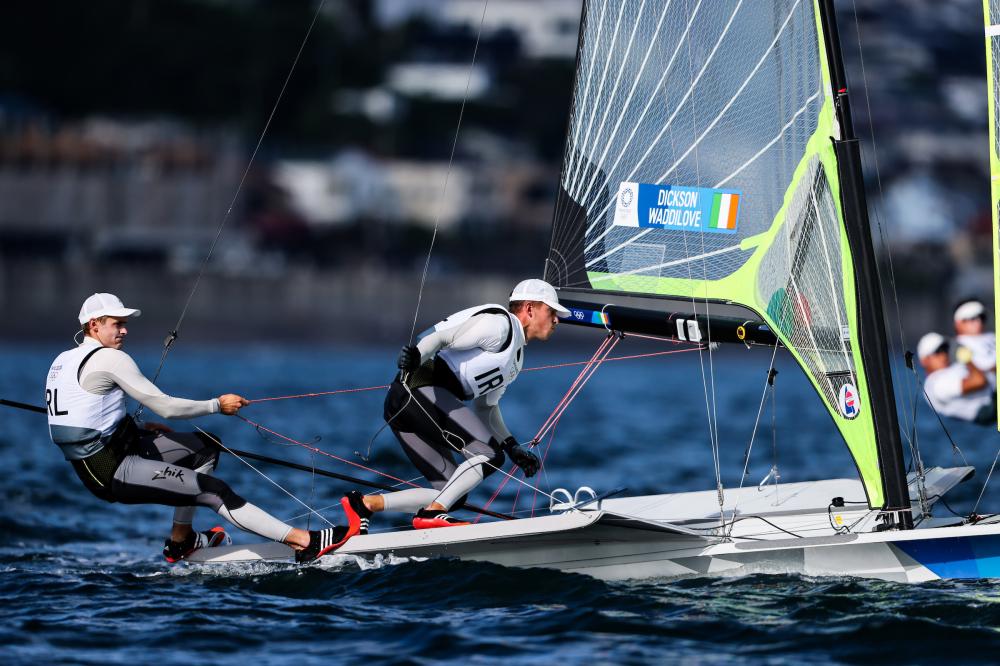 The breeze had dropped a lot since the 49erFX fireworks earlier on the Enoshima course. The first race eventually got away after 16:00 JST in a 10-12 knot breeze which kept the teams on their toes throughout. Eventually a pattern emerged and it was Ireland’s Rob Dickson and Sean Waddilove that came to the fore, hounded by Dylan Fletcher & Stu Bithell (GBR).

The young Irish crew misjudged the finish line opening the door for Great Britain to steal the win, but in a photo finish it was the Irish who took the gun.

“We came here with not too many expectations,” said Dickson. “This is our first Olympics. So we didn’t have any real results or goals coming into this – just to go and deal with what we have on the water, the conditions and do our best. We have 11 races to go, anything can change. You’ve just got to be ready for everything.”

Fletcher is engaged to British teammate Charlotte Dobson in the 49erFX and was mock-irritated to have had his second place trumped by his fiancée’s stellar start to her competition in the 49erFX. 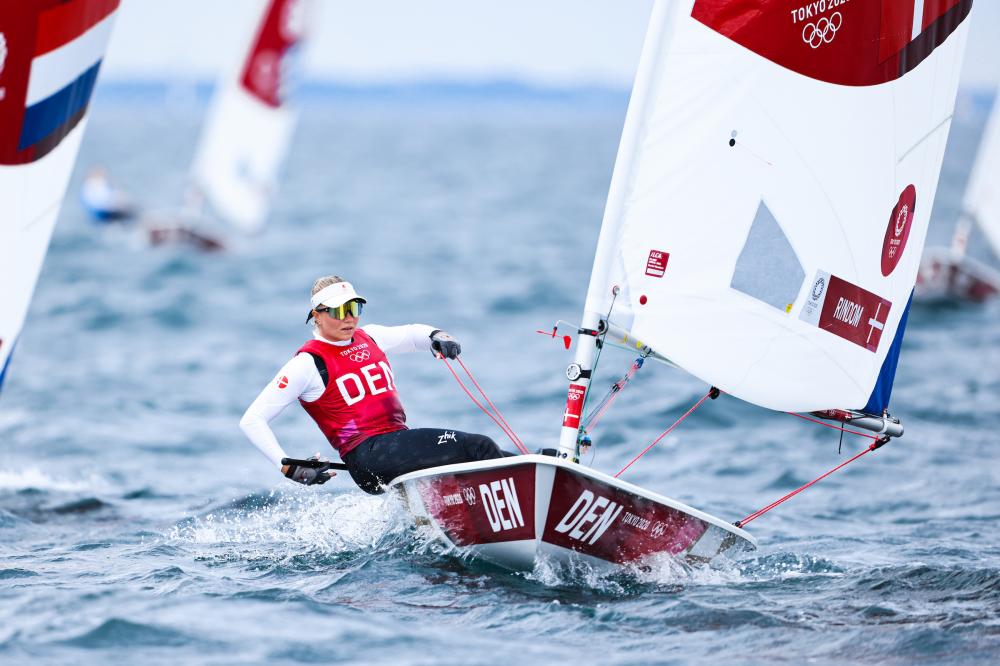 Josefin Olsson was the big mover of the day in the Laser Radial, scores of 1,6 lifting the Swede to second overall. It was also a very good day for Marit Bouwmeester (NED) who continues to fight back after a difficult start. The Dutch sailor’s scores of 3,9 move the defending Olympic Champion into a podium position for the first time this week.

Just six points separate second to sixth place in the overall standings. However, 12 points clear is the ever-reliable Dane, Anne-Marie Rindom. She has talked a lot this week about keeping a head out of the boat and looking for ever-changing scenarios.

“Today was a head-out and a heads-up day, because the clouds had a really strong effect on the wind,” said Rindom. “I could hear my dad telling me ‘sail towards the cloud!’ but it didn’t always work. It was another really tricky day.”

Wednesday is a day off for the Laser Radial and Laser fleets, although Olsson would have liked to carry on her momentum from today. “It’s been pretty intense days on the water,” she commented, “so I suppose a rest would be good, but tomorrow it looks like really good conditions. It’s a bit of a shame as well not to be going racing again.” 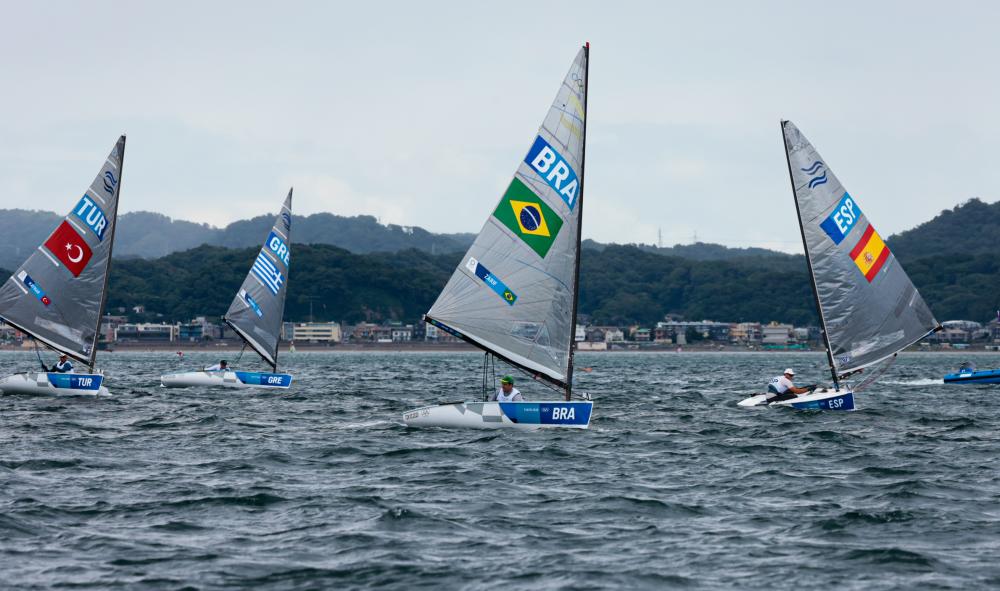 Turkey’s Alican Kaynar enjoyed a dream start to Tokyo 2020, the Turkish sailor winning both races in the Finn on the first day of their competition. “I think the two races were quite difficult, different from each other,” said Kaynar. “The first race was more to focus on the shifts and to see the wind and the second race was about good downwind speed, so I had a good time.”

One of the favourites for gold, Zsombor Berecz, sailed an excellent couple of races, the Hungarian coming second in both behind Kaynar. The youngest sailor in the fleet, Spain’s 23-year-old Joan Cardona, was leading the second race in the early stages before falling to third, to go along with his third place in race one, putting the Spaniard in third overall.

“One year ago maybe I wasn’t even thinking I could make it to the Olympic Games,” explained Cardona, who is also the 2020 eSailing World Champion. “I made a big improvement in the last year. I’m happy that I’m sitting in third, but still a long way to go.”

Among those good sailors is Giles Scott (GBR) who struggled across both finish lines in ninth place, putting the defending Olympic Champion in ninth overall. 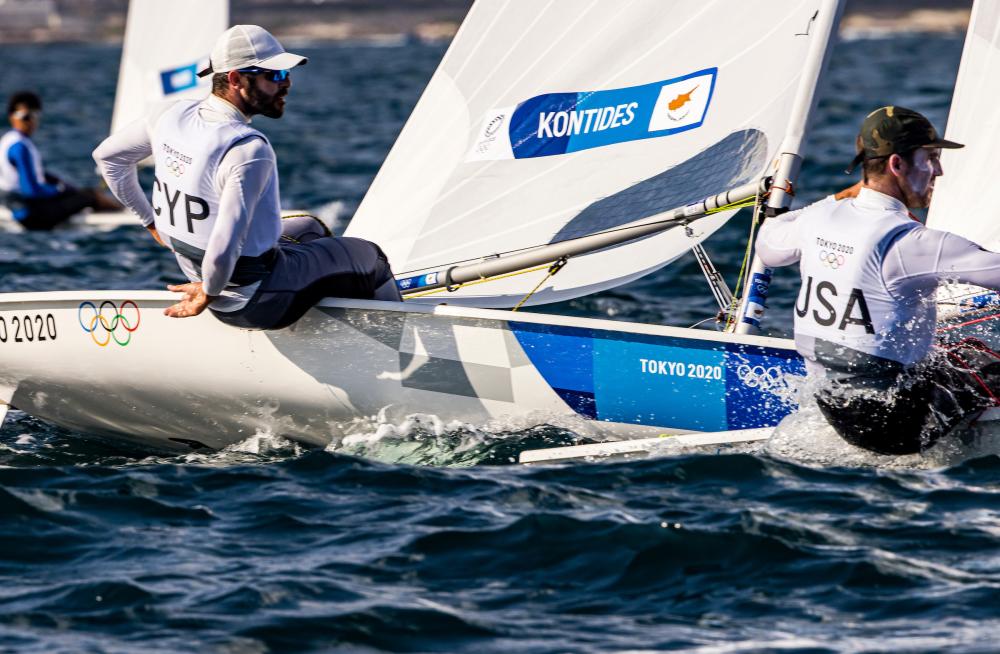 The bad news for Pavlos Kontides fans is that the Cypriot superstar finished 20th in the middle of today’s three Laser races. The good news for Kontides fans was that he won the first race and the last race of the afternoon. This has launched the double World Champion into first place with a nine-point cushion on second place, which is occupied by Matt Wearn who has bounced back from a terrible start to the regatta with an incredible afternoon of consistency – 4,2,2 were the Australian’s scores.

Six points further back in third place is the oldest man in the fleet, Brazil’s five-time Olympic medallist Robert Scheidt. No matter how many medals he’s won in the past, 48-year-olds aren’t meant to be able to beat 20-something athletes at the peak of fitness, but Scheidt is no ordinary 48-year-old.

Just one point behind Brazil in fourth place is Hermann Tomasgaard (NOR) who sailed a very strong day and gives Norway hope of a medal in this unrelentingly tough fleet.

Racing is scheduled to resume on Wednesday 28 July at 12:00 JST. The Nacra 17, Men’s 470 and Women’s 470 will sail their first races. The 49er, 49erFX and the Finn continue their schedule while the Men’s and Women’s RS:X return to the water. The Laser and Laser Radial fleets will enjoy a day of rest before competition resume on 28 July.

Gold Medals for Italy & Brazil and two for Great Britain

Lack of wind sets up for four medal races on Tuesday