Day for the tacticians – Maxi Yacht Rolex Cup gets underway

Owner-drivers and crews taking part in the Maxi Yacht Rolex Cup were eased gently into competition off Sardinia’s Costa Smeralda today as they fought to make the most of variable sub-10 knot winds out of the northeast quadrant. The light start was appreciated as due to the pandemic this is the first time in two years that the three maxi classes (Mini Maxi 60-80ft; Maxi 80-100ft; Super Maxi 100+ft) have been able to race in their pinnacle event, organised by the Yacht Club Costa Smeralda in conjunction with maxi yachting’s governing body, the International Maxi Association.

While the YCCS’s courses are renowned for their usually strong prevailing northwesterlies that funnel down ‘Bomb Alley’ between the Costa Smeralda and its spectacular off-lying islands, today’s northeasterly wind direction was unusual. The race committee led by Peter Craig therefore sent the fleet off to a weather mark offshore and then on an anticlockwise lap of La Maddalena and Caprera, culminating in a tactical beat up to the Monaci islands before heading south to the finish off Porto Cervo.

The Maxis were the first to get away with Wendy Schmidt’s new Botin 85 Deep Blue nailing the start to perfection midline above Sir Lindsay Owen-Jones’ Magic Carpet Cubed, with the 100ft Comanche, the highest rated across the fleets, close to the pin. In fact it was only on the run back from Monaci and the final short leg into the finish when the race was decided. Here, with boats coming in on different gybes, it was the Magic Carpet Cubed that beat both the mighty Comanche and George David’s Rambler 88 on the water. However under IRC corrected this was only good enough to score the navy Wallycento second with Irvine Laidlaw’s four time Maxi class winning Reichel Pugh 82 Highland Fling XI coming out on top.

Highland Fling XI’s tactician, round the world racing legend Bouwe Bekking, commented: “It helped being the smallest boat in the fleet to be clear of the others – that worked really well on the first beat and then it was just keep following the others and we did the transitions quite nicely. The run into the finish we brought up a bit of pressure.” Bekking, who last sailed with Laidlaw 22 years ago in the early IMS era, was impressed with the 82. “The boat goes well in the light stuff. The Wally 100s – they are double our weight so in every puff we probably gained more. Plus they have a solid crew who know how to sail the boat.” 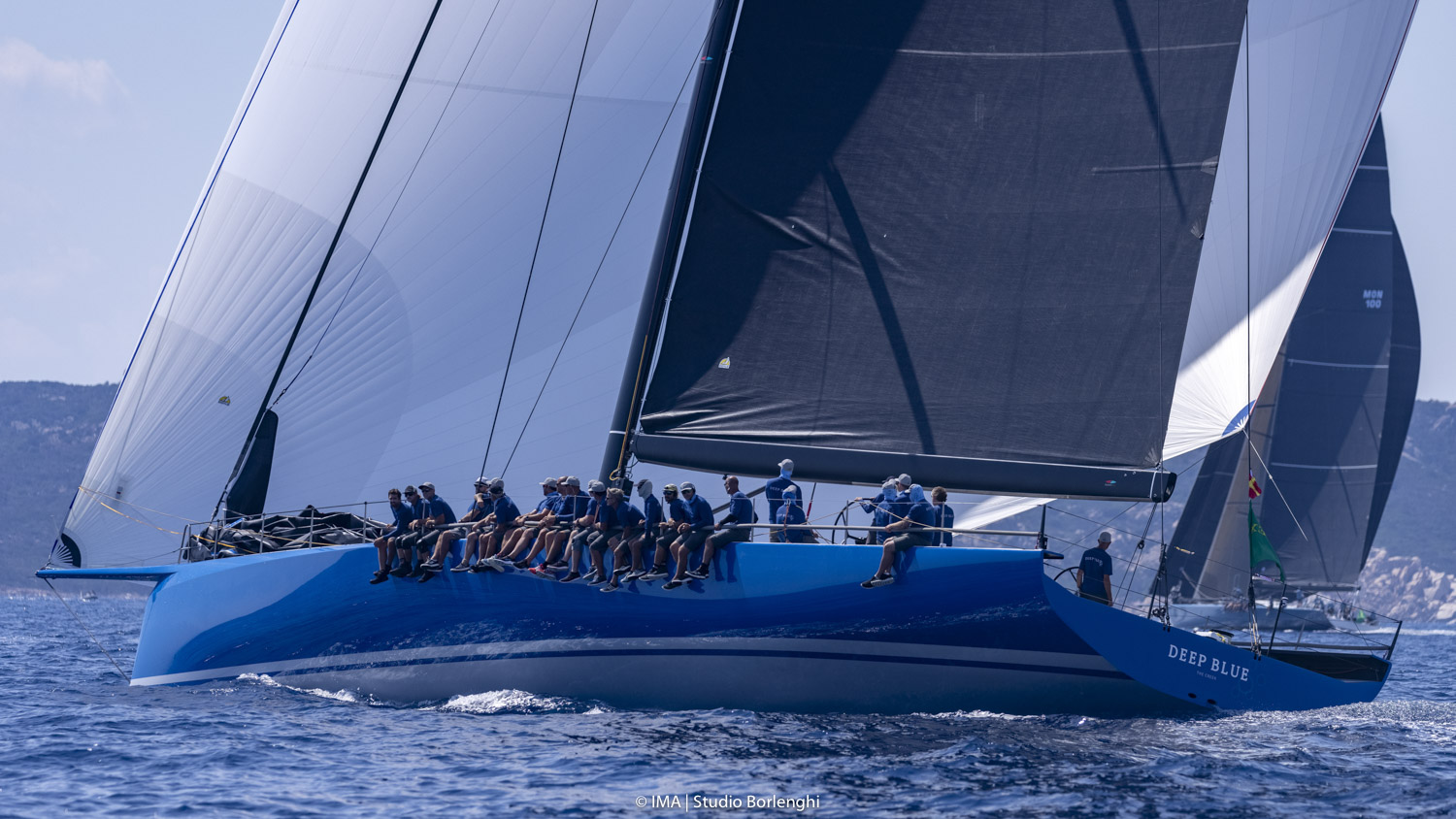 In the fleet all eyes were on the new grand prix racer Deep Blue that today posted a respectable fourth in the 12 boat Maxi fleet. “It was fun because we were learned a ton, even on the first beat,” recounted tactician and project manager Rob Macmillan. “The owner had a super good time – it was the right wind speed, and her first time starting with 12 other boats around. We won the start and she had a big grin about 10 seconds after that. But the race felt like it was 100 miles long! There were lots of lead changes and back and forth between the boats, but the team sailed super well. It was tricky and fun. The final downwind was great – trading gybes with all of the boats.”

Among the 100+ft Super Maxis, it was the much anticipated re-match between the two Js where there was most action. While Topaz started magnificently, Velsheda didn’t and the race appeared to have been decided in the opening moments. However in a classic example of ‘never give up; never surrender’, Velsheda managed to gain the lead on the subsequent beat up to Monaci. “At Golf [the mark due south of Caprera], we went from a fetch to upwind back to Monaci,” explained Mike Toppa, sharing navigational duties with Andy Beadsworth this week. “They rounded and went on the wind and we rounded and tacked. So we split, which we wanted because there was more pressure, and it worked out. They had to do two extra tacks and we jumped them.” Ronald de Waal’s team then was able to hang on to win by just under two minutes on corrected time.

Toppa and Beadsworth are standing in for some of Velsheda’s Kiwi regulars, notably Tom Dodson, who have been unable to make the event due to COVID travel restrictions.

While the Swan 115 Shamanna finished just ahead of them on the water, the correct times for the Js were more than 15 minutes ahead.

Similarly in Mini Maxi 1, it was the seasoned crews on the former Maxi 72s that prevailed with all five finishing within seven minutes on the water and holding the top spots under IRC corrected time. Among the five there were some snakes and ladders with, for example, Peter Dubens’ newly acquired North Star of London (formerly Rán II) leading out of the top mark with Hap Fauth’s favourite Bella Mente and then defending champion Dario Ferrari’s Cannonball sneaking ahead around the top of La Maddalena. Ultimately despite another roll of the dice on the final run, Cannonball prevailed to win by more than five and a half minutes under IRC corrected time from Jim Swartz’s Vesper.

“I think the main thing coming out of today is that we have seen five boats and any of them can win,” mused Cannonball’s tactician Michele Ivaldi, who after almost 25 years of separation has been reunited with his fiery compatriot Vasco Vascotto. Cannonball’s result is unusual given that she hasn’t raced in the last two years, while her competition has. “The boat is still well optimised,” Ivaldi continued. “But we started a bit back from the others. We knew we had to do everything perfectly to be in front. It was a good day but we managed to make most of the calls right.

“The first beat was hard because it wasn’t clear which side would pay. We got in front and then we just had to stay between them and the mark. It was a good fight until the end.” 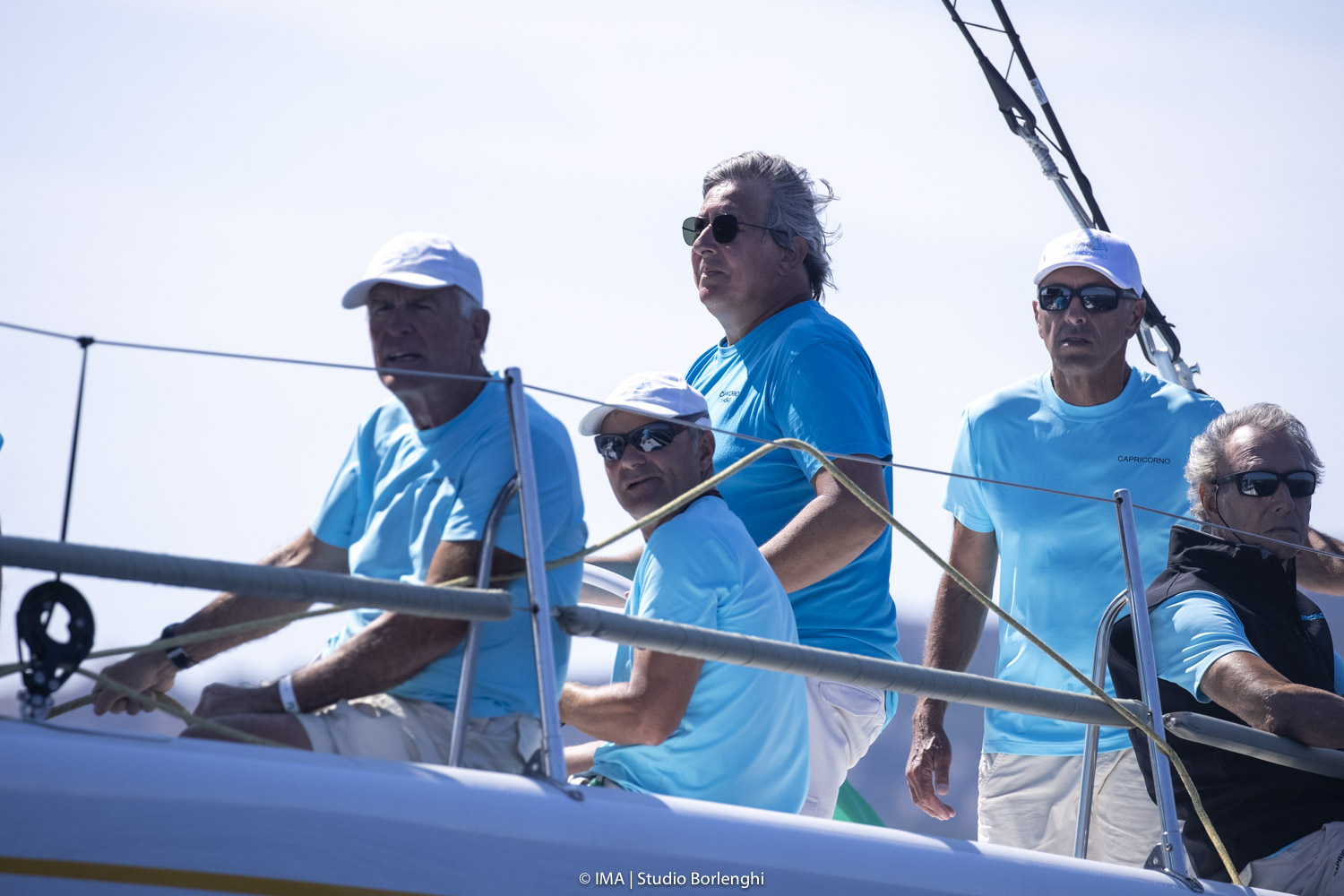 Mini Maxi 2 was a two horse race today in which waterline length paid. Winner was Alessandro Del Bono aboard his ILC maxi, the Reichel-Pugh 78 Capricorno, from Twin Soul B, the 80 footer from Mylius Yachts owner Luciano Gandini. The Capricorno team has been together since Del Bono’s father used to compete in events such as the Admiral’s Cup. Tactician Flavio Favini has been with them since this time.

“We did okay today,” said Favini. “We made some mistakes close to Monaci island, where we weren’t close enough to the Caprera shore where there was less current. We had to go out a couple of times to avoid being cut down by the J Class and there we lost a little bit.

“It is very good to be here. Everyone is excited to be back.”

Winning by the biggest margin across all of the classes was Canadian Terry Hui’s Wally 77 Lyra which claimed Mini Maxi 3 by almost 35 minutes from Luca Scoppa’s Dehler 60 Blue Oyster. Lyra has won the Wally class in the last two editions of the Maxi Yacht Rolex Cup.

New Zealand tactician Hamish Pepper explained: “It was a tricky day because it was pretty light and the breeze was shifting a bit. Through the Strait with the islands influencing things, it was quite tough.

“We had a little bit of a hiccup at the start – we didn’t ping the pin properly. We got back into it and went the right way for the second half of the beat and after Golf we passed a few boats when there was a bit more breeze inland. Then we came into the finish with dying breeze.”

Racing continues tomorrow with more coastal races scheduled. According to Costa Smeralda regular Flavio Favini, the forecast for the remainder of the week has the wind remaining in the northeast as it was today. “The best conditions are northwest with flatter water and drier air, but I don’t think we will see that this week.” Races will continue until Saturday, with a lay day scheduled for Thursday.