The wind off Porto Cervo never filled in on the final day of the Maxi Yacht Rolex Cup. Thus, following Friday’s layday, the results at the end of play on Thursday stand, at this the pinnacle event of the maxi yachting calendar, organised by the Yacht Club Costa Smeralda in conjunction with maxi yachting’s governing body, the International Maxi Association.

For the third time, the stand-out performance across the maxi fleets was that of Canadian Terry Hui’s Lyra. The 2000 vintage Wally 77, once raced by the Murdoch family, was first campaigned by Hui in 2018 and won the Wally class that year and in 2019, when she scored firsts and seconds in all but one race. This year, with the Wallys incorporated into the main IRC fleets, Lyra won Mini Maxi 3 with four straight bullets. Often this was by a significant margin, although Riccardo de Michele’s Vallicelli 78 H20, which has previously dominated the Mini Maxi class, was second to Lyra by two minutes under IRC corrected time on Wednesday.

In fact Lyra is a well optimised boat with a top professional crew led by Kiwi tactician Hamish Pepper and including round the world sailor Phil Harmer, former Team Shosholoza America’s Cup navigator Marc Lagesse and skipper Mark Sadler. “That definitely helps,” says Pepper. “We have a lot of sailors from the TP52s and RC44s and every manoeuvre we do with grand prix style and we push the boat to get every inch out of it. Terry got us a new main and new jib and the boat had a few improvements like new rigging and the mast is a lot better balanced so we can get the right tension out of it.” 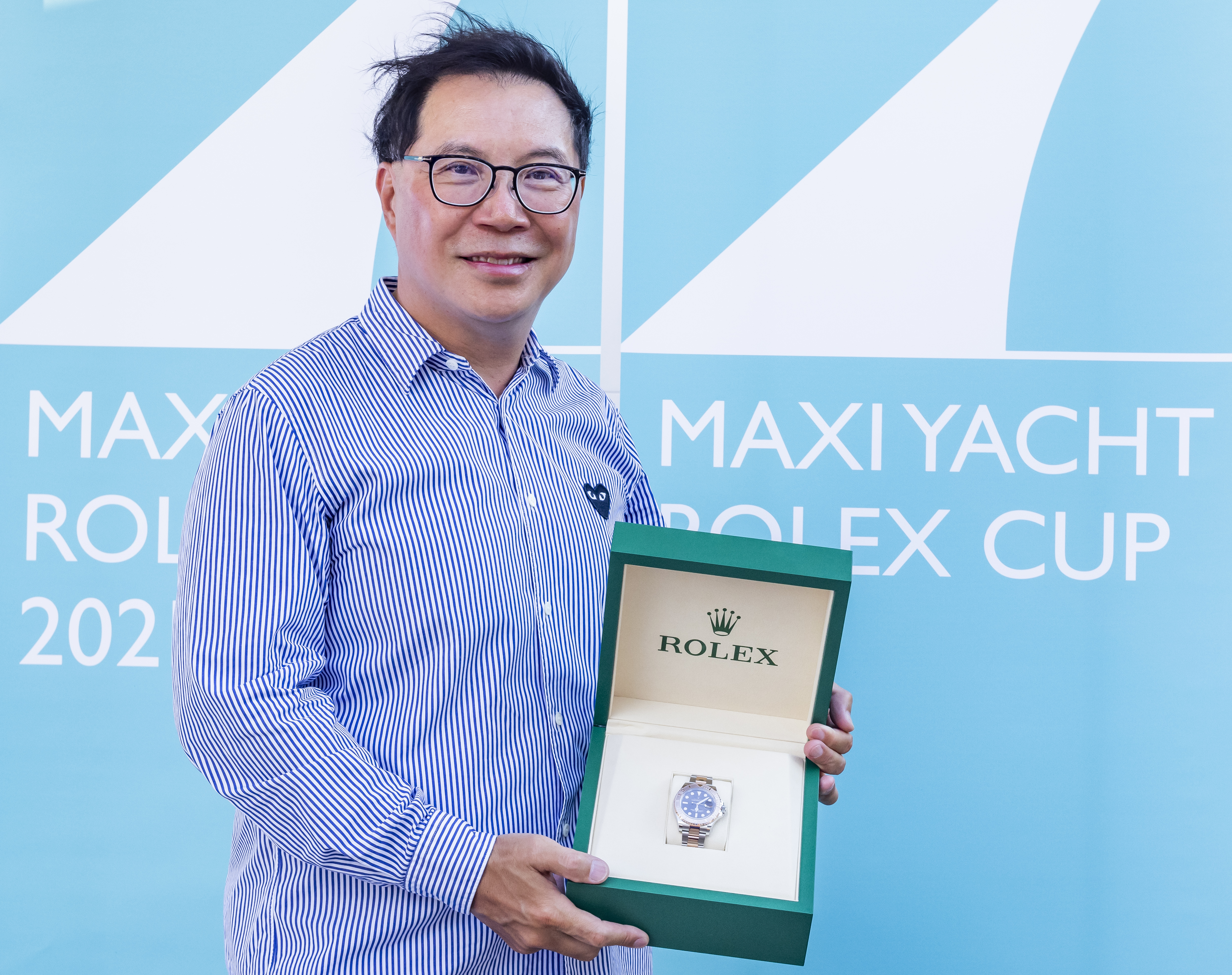 Owner Terry Hui added: “I have been lucky to have a good boat and a good crew, but most importantly lucky to be back. It makes me feel that whatever we take for granted, that is normal, is actually so precious and it makes you appreciate that what we have been doing is very special.”

At the opposite end of the maxi spectrum, in the 100+ft Super Maxi class, Ronald de Waal’s magnificent J Velsheda enjoyed a near perfect scoreline, dropping just one race to Topaz on Thursday. The two Js have dominated the Super Maxi class with Christian Oldendorff’s Spirit Yachts 111 Geist finishing the regatta tied on points with the Swan 115 Shamanna, but winning on countback.

British America’s Cup and Olympic sailor Andy Beadsworth, sharing tactical duties with American Mike Toppa on board Velsheda, said of his first week J Class sailing: “It has been great. I thoroughly enjoyed sailing on the boat and with the team. We had a couple of phenomenal races against Topez when we were never more than three boat lengths apart.”

Beadsworth, who has previously raced here and won aboard boats like Michael Cotter’s Whisper and Windfall, the late Sir Peter Harrison’s Sojana, continued: “They have differences upwind and downwind, but overall they are very evenly matched. They are less manoeuvrable than a lot of boats and you really need to steer them with the sails. So it is team effort to get the boat around the track, but a team like this makes it look deceptively easy…”

The closest racing was between the former Maxi 72s, which ran away with the top five spots in Mini Maxi 1. Ultimately Dario Ferrari’s Botin-designed Cannonball, finished two points clear of Jim Swartz’s Vesper in turn one ahead of both George Sakellaris’ Proteus and Hap Fauth’s Bella Mente.

Cannonball was the defending champion here and racing with the same equipment as in 2019. “The crew was very good, the tactician was very good – so we won,” explained Ferrari. “I believe that this is the best class and between everybody the racing is close.”

Victory has inspired Ferrari to compete with Cannonball again in 2022. “The boat is fast enough. We haven’t done anything this year to make it faster. With new sails and changing a few things we could be more competitive, so why not? The nice thing about this class is that you improve every year.”

Sharing tactical duties this week on Cannonball were both Michele Ivaldi and Vasco Vascotto. Of their victory, Vascotto said: “For sure it is surprising because we know how strong the other guys are, but this week we did everything nice and smooth. We made some mistakes but not many and this is still a very good boat.” This was Vascotto’s first win in the class having previously come second three times.

Some of the closest racing has been in the Maxi class for 80-100 footers where an unprecedented six 100 footers were competing plus the new Swan 98 BeCool. Ultimately 100ft Wallys tied up the podium with Sir Lindsay Owen Jones’s Magic Carpet Cubed coming out on top, two points ahead of Claus-Peter Offen’s older Y3K, in turn two ahead of David M. Leuschen’s Galateia. 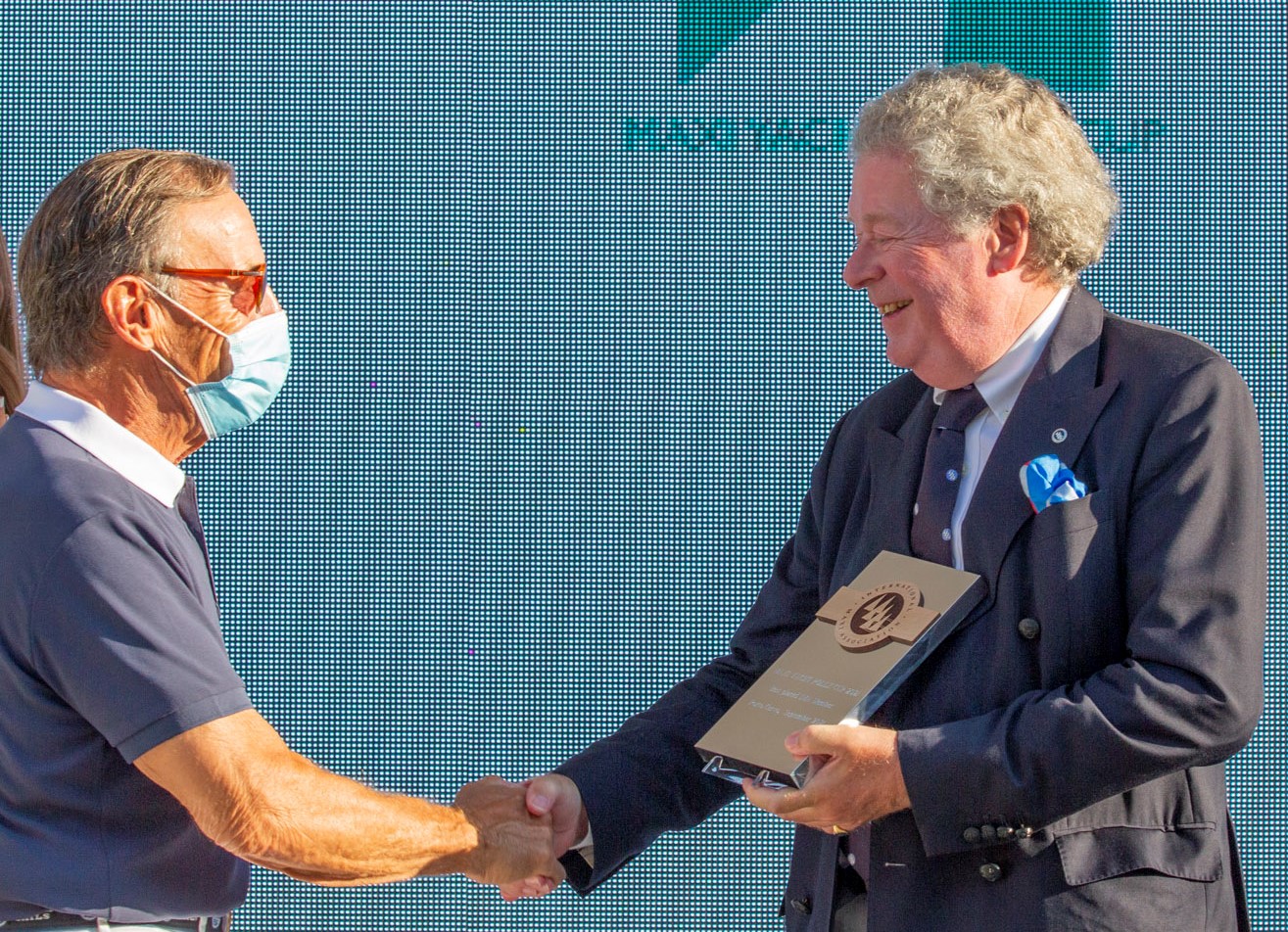 For Owen Jones, one of the longest term supporters of both the Maxi Yacht Rolex Cup and the International Maxi Association, this was the seventh time he has won this event in his various Magic Carpets, the last being in 2016. “I am very happy,” he said. “None of us had the faintest idea how it would work out against all these incredible boats that have won the Rolex Fastnet Race or Sydney Hobart, etc [ie Rambler 88, Comanche and ARCA SGR] but Magic Carpet is a well rounded boat that does most things pretty well. The other boats do some things extremely well. That is reflected by how we didn’t win any races but were always up there which you can only do if you sail the boat well.”

On Thursday, Irvine Laidlaw’s Highland Fling XI was enjoying a commanding lead in the Maxi class until her forestay broke. Impressively the team moved heaven and earth to get a new carbon fibre forestay sent out from Carbolink in Switerland aboard Laidlaw’s private jet. Once arrived last night, the stay was tensioned on the dock using hydraulic rams and then cured by running electric current through it – a process taking just five hours, before it was reinstalled. Highland Fling XI ended the regatta in fourth, designers Reichel/Pugh having drawn three of the top four in the Maxi class.

For Wendy Schmidt, owner of Deep Blue, this Maxi Yacht Rolex Cup was a great relief. Although her Botin 85 was launched in February 2020, due to the pandemic this was the first race for her ‘Maxi 72 on steroids’. Deep Blue finished fifth in the 12 boat fleet. “This was our maiden voyage, finding out about the boat and its modes. We had great competition to do that with, so we have nowhere to go but up,” said Schmidt, who raced here previously with her Swan 80 Selene.  “It was a great event, wonderful for our crew to get back together and to tune the boat up.”

Del Bono’s Capricorno is a family affair, his father (with a young Alessandro on board) having raced in Admiral’s Cups, while today Alessandro’s own son Rinaldo races on board.

Del Bono last competed at the Maxi Yacht Rolex Cup in the early 2000s and despite Capricorno being old, it has been thoroughly modernised, reducing draft from 4.5 to 4m with optimised rig and sails. “We knew we were competitive and in the end we achieved the result we fought for,” del Bono explained. “The races were very good.”

At the prizegiving, the IMA’s Secretary General Andrew McIrvine presented Sir Lindsay Owen Jones with the Trophy for finish ‘Highest Placed IMA member’ while the Paolo Massarini Trophy (named after the manager of several notable classes, such as the Wallys, who died last year) was presented to Capricorno’s Alessandro del Bono by Paolo’s wife Alessandra.

The Maxi Yacht Rolex Cup was the third event in the International Maxi Association’s Mediterranean Maxi Inshore Challenge which continues with Les Voiles de Saint-Tropez and then Palmavela in October.